Yesterday I spent the day in my kitchen, attempting to capture the amazing food that I experiences when in Italy. While in Florence we stopped by a book store and I eagerly purchased one of the few English text cookbooks that they had: Everyday Italian Favorites.

I went through the book and found a few recipes to try. What I settled on was Sage Focaccia & Pumpkin Ravioli.

After going through the instructions and confirming that I have all required equipment to make these 2 recipes, I got to making my grocery list. Unfortunately, even though it is fall, there were no pumpkins at the grocery store. The pumpkin ravioli became butternut squash ravioli. 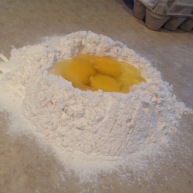 Back to the safety of my own kitchen, I got to work. Step 1 was making the dough for the ravioli. Following the instructions to a T, lets just say that there was far too little wet ingredients for the dry ingredients. I kneaded that stuff as best I could but had to add an extra egg and a bit of water that it didn’t actually call for.Once I got it in the fridge I got to work on Step 2, the filling.
Thinking about it now, the instructions would have resulted in a pumpkin being steam: cut the pumpkin in half and scoop out the seeds and fibers. In a shallow pan, fill it half full with water, place the pumpkin halves face down and cover with foil.

The thing with squash is that only the large bottom portion is hollowed – so the water was in direct contact with much of the edible portion, boiling it vs. steaming it. It still softened quite nicely after and hour and a half in the oven but had a lot of water in it.I took it out of the oven, pulled it from the water and placed it face down on a wire cooling rack. Once cooled I cut the skin off and pressed it through a colander with fine holes and mashed it with a potato masher. There was a bunch of Parmesan grated into it, then seasoned with nutmeg, salt & pepper. Now that I have eaten it, I realize that it may have been more effective to put it through the food processor for extra smoothness.

I got the dough back out and rolled it out as best as I could with my rolling-pin. I just could not get it thin enough so got out my smallest circular cookie cutter. Once it was in smaller pieces it was way easier to roll into nice thin pieces. It however did mean that they were not symmetrical so  I could not match up two pieces. If only I had a pasta press to make even pieces! I decided to fold these thinned our pieces like perogies. Luckily it worked out just fine!
Once stuffed, they went into a pot of bowling water on the stove for 10 minutes, strained, drizzled with EVOO and devoured. They were pretty darn good if I do say so myself! I didn’t need too many of them so will have left overs for a couple of days.

Focaccia bread is something that I love. I love the smell, the texture, the taste… Dip that stuff in some EVOO & Balsamic and I will just keep eating until there is none left in sight. I was really excited when I saw that it was in this book.

When making the dough for the recipe, I have the same complaint that I had for the pasta. There was not enough wet ingredients for the dry ingredients. I added almost twice as much as what it called for it and it was still crumbling. Worried that I had already ruined it, I put it to the side so that it could rise. This should have been my next clue that it wasn’t working out… it was supposed to double in size but i did not actually notice any change in stature.

Into the oven my focaccia dough went. After the called for time of 25 minutes, the dough was still sticky, definitely not done. I gave it another 10 minutes before pulling it out. Parts of it were hard and part of it were still completely uncooked. It would be a fair assumption to say that it is now living in my garbage can. The scent of olive oil and sage was divine though. I will need to find another recipe to try and hope that it works.

All in all, I  learnt that real Italian food is full of fresh ingredients and that it takes love and labour to make such amazing food. The pasta has so much potential with the right tools that I will be making it again. Just because the one recipe was a dud doesn’t mean that they all will be. I have a couple more recipes that I plan to try later this week! Stay tuned for an update on those 🙂